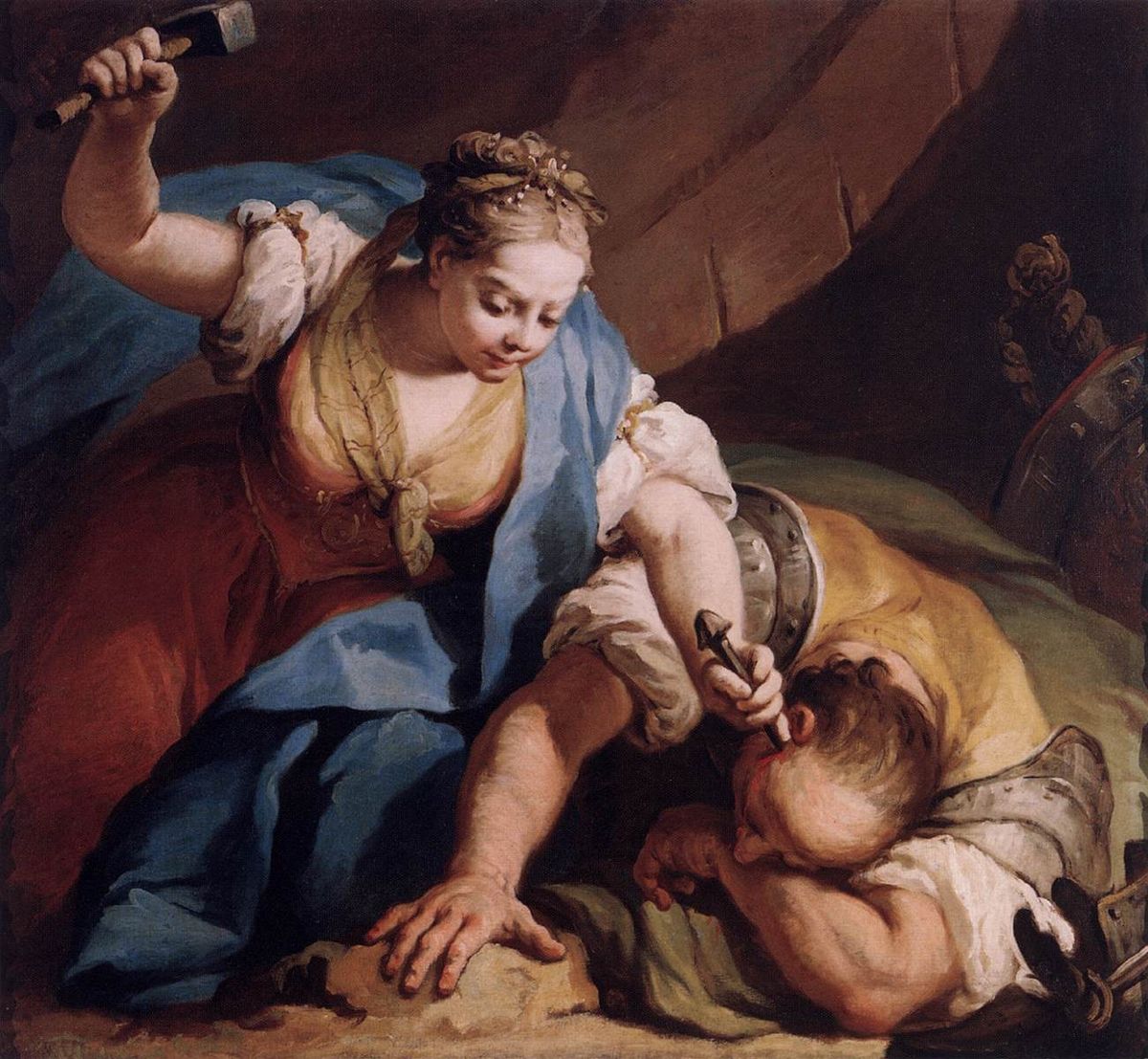 Both in protest of our nation’s rampant misogyny that walks around wearing religion’s clothes — and also because I love their stories — here’s a shoutout to the badass women of the Bible: to Rizpah, who guarded the bodies of her children from wild animals and carrion beasts all night, defying the king and his soldiers; to Deborah, a middle-aged prophet who settled the court cases no one else could and led armies against an invading force; to Jael, who drove a tent peg through a dude’s head; to Mary, who fled to another country to keep her baby from being killed and then later after returning raised her child in a small town where everyone thought she was a “slut” — and raised him so well that the world still reveres his name (and hers) to this day; to Mary Magdalene, who endured the disbelief of everyone she ever told about what she saw, but didn’t disbelieve herself; to Judith, who seduced an invading general in order to get close enough to chop off his head; to a woman whose name we don’t remember, who stood on the wall of a starving city and killed the tyrant Abimelech by chucking a brick down at his head; to Miriam, the first of the prophets of the Children of Israel after their departure from Egypt, singing on the shores of the Red Sea moments after seeing her people’s enemies crushed under falling water; to Huldah, who commanded such respect that when the lost sacred texts were discovered, the priests handed them over to her and said, “Please interpret these for us, Huldah”; to Dorcas the healer, who refused to leave those dying of fever, no matter the contagion; to the Queen of Sheba, who traveled a continent to meet people of learning and establish trade deals for her nation; to Joanna and Susanna, who funded Jesus’s ministry and had a great deal to do with the early disciples not starving on the road; to Prisca, Mary, Julia, Phoebe, Junia, Chloe, Euodia, Syntyche, Tryphena, Tryphosa, and others, apostles and leaders of the early church; to Mary sister of Martha who studied with a rabbi, and to Martha sister of Mary who did the dishes and cooked so she could; to the unnamed, brave woman who suffered continual bleeding and a life of being outcast and untouchable by her community and who yet found the courage to seek out a miracle worker and commit what her community would treat as an unforgivable act: to touch him; to Anna, who spent nearly a century prophesying in the Temple; to Jochebed, who sent her baby down a river in a basket rather than let him be found by genocidal soldiers; to Abigail, who prevented a massacre; to Dinah, who got blamed for one; to Hadassah (Esther), who stopped a genocide from happening on two continents; to Tamar, who found an unusual, daring, and quite horrifying solution to her father Judah’s neglect in leaving her unprovided for and starving; to Delilah, who outwitted and captured her people’s greatest foe; to Mahlah, Noa, Hoglah, Milcah, and Tirzah, who marched up to Moses in the desert and said, “We don’t have a brother, and we want to inherit our father’s property”; to the eshet hayil (the “woman of valor” who “stretches out her hands to the needy”) who fed Elijah when he staggered, exhausted and starving, to her doorstep, though she had only a single cake of bread left in the house; to the Shulammite, who loved a foreign king, survived prejudice and brutality, and chose love over fear, even against all the terror-pressure of past trauma; to Bathsheba, so often remembered as a victim of either rape or seduction, so often reduced in our retellings to a momentary plot device, but whose actual story lasted decades and who successfully maneuvered her only son to the throne; to Naomi, who lost so much to famine and tragedy, yet found joy again; to Ruth, who immigrated to a land hostile to her people, yet stayed and kept her mother-in-law and herself fed and alive, daily risking rape or worse in the fields where young men followed the vulnerable, “exotic” immigrant gleaners at a near distance; to Lydia of Thyatira, the businesswoman who funded Paul’s missionary work in Macedonia because a story he told once lit her heart on fire; and to so many, many others who lived such stories.

God’s Self-Confident Daughers: Early Christianity and the Liberation of Women

The Rebel Virgins and Desert Mothers

The Misleading Translation of “Wives, Submit,” and a Tale of Battle-Ready Women