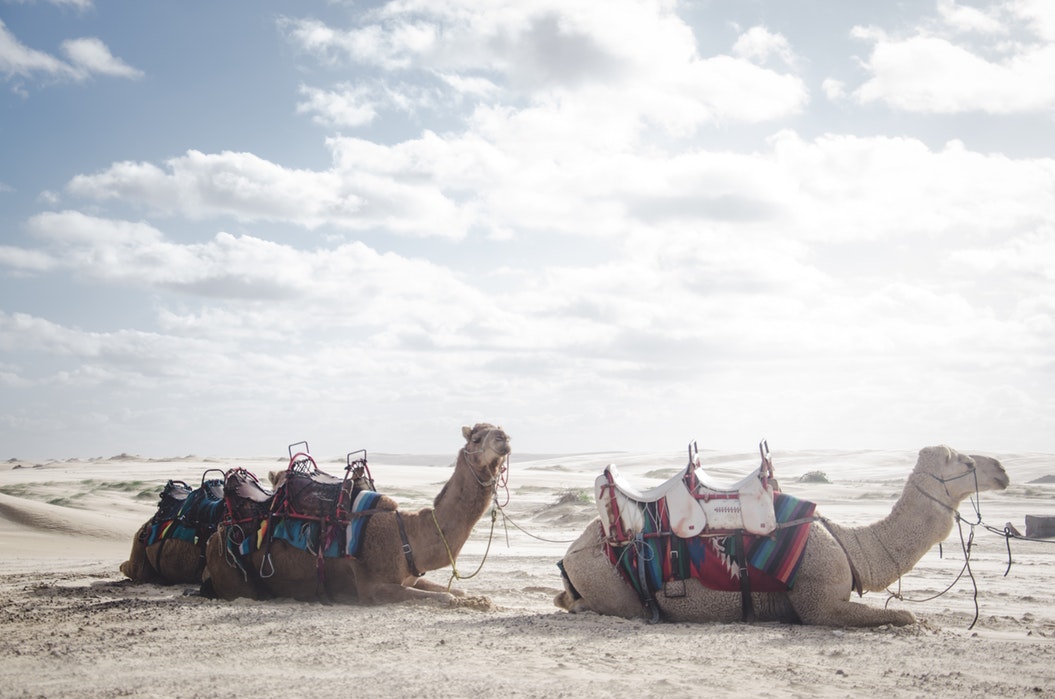 Someone mentioned the squeezing of a rich man through the eye of a needle yesterday, and of course I started reflecting on mistranslation and the evocative power of language. The camel and the needle is one of my favorite examples of translation shenanigans, and is all the more delightful because no matter which way you translate or mistranslate it, the message of the metaphor remains roughly the same. For those not in the know, here’s what happened. Very probably, the rabbi Yeshua told his followers two thousand years ago that it is easier to thread a rope (like the big ropes used on fishing boats on the Sea of Galilee) through the eye of a sewing needle than it is for a rich man to enter the kingdom of heaven. But, in Aramaic – the language he was speaking and the language in which the source text for the synoptic gospels was probably written – “camel” and “rope” are spelled the same: “gml.” They do -sound- different, but written Aramaic doesn’t often represent vowels. So someone dutifully recorded, “gml.” Now this gets even funnier when the synoptic gospels come along and people are translating the words of Christ into Koine Greek. Because in Koine Greek “camel” and “rope” are ALSO the same word, distinguished in text by a single vowel but pronounced almost identically. Camel is “kamelon” and rope is “kamilon.” In Latin and English, of course, “camel” and “rope” are really easy to tell apart. But, in both Aramaic and Greek, they are not. So while it is frustrating enough to try jamming a knotted fishing rope through the eye of a sewing needle, now we are left with the image of a massive dromedary squeezing through a needle, hump and all, and the rich are not only in a proper mess, but comically so. For want of a vowel!

It’s an amusing case because the meaning comes out somewhat similar in either case. And “camel” fits Jesus’s teaching style, which often made humorous use of hyperbole.

Other mistranslations are more sinister, like the popular translation of “arsenokoites” as “homosexuals,” which is a stretch, as there is a separate Greek word for that. “Arsenokoite” is a compound of “man” and “bed” and no one knows what the word means because its usage is so rare and it only appears in lists, without context. It’s been suggested that it was a reference to gigolos, but that’s an equally unsupported guess. In one case the word occurs next to “malakoi” (the luxurious). The traditional interpretation that malakoi and arsenokoites are paired labels for ‘submissive’ and ‘dominant’ partners in sex acts remains guesswork, and other interpretations are just as, or more, plausible. For example, malakoi arsenokoites (“soft ones, man-beds”) could easily be a colorful reference to pleasure-loving rich men who loll about on bed eating grapes all day and ignore the suffering of their impoverished neighbors. That’s a type of vice that the New Testament lectures on frequently and at length, and to which the letters in which these words appear devote considerable attention. Jesus warns that it is not easy for the rich and avaricious to reach the kingdom of heaven (as difficult as threading either a camel or a very heavy fishing rope through a needle!), and in Paul’s second letter to Corinth, those who have wealth but are slow to contribute are taken repeatedly to task for abstaining from giving or for giving only sparingly when they see others in need. Rich, luxurious, gaudy living was also a vice that Greeks and Romans alike tended to scorn and treat with mockery. (They would have found Trump Tower hilarious.) Reading “malakoi arsenokoites” in this fashion is conjecture—but so is every other proposed reading of malakoi arsenokoites.

Other problematic cases include “ezer kenegdo” (which the West translated as “a helpmeet,” a word that meant sense in seventeenth-century English but that we often receive, four centuries later, as conveying a servile role; in Hebrew, ezer kenegdo simply means a helper partner and doesn’t imply hierarchy and is the same word used to describe God’s status toward humanity); or the transformation of the Proverbs 31 “eshet chayil,” the woman of valor, into the “virtuous woman” in many English translations (in seventeenth-century English, “virtue” still suggested the Italian “virtu” with its courage and boldness, and “virtuous woman” suggested something very different then than it does today); or the misinterpretation of “kephale” (head) to mean authority (authority is a different word), because of a Latin idiom we inherited that doesn’t exist in Greek (the Latin word for head also means leader, but in Greek “kephale” simply suggests origin, like the head of a spring or a river, and not authority) — someone asked for a link, so here you go, Marg Mowczko covers the research on “kephale” here.

— Or the mistranslation of “hupotassomenoi” as “submit,” as in, wives submit to your husbands, when “hupotassomenoi” doesn’t mean submit in Greek (there’s a different word for that). Hupotossomenoi is really hard to translate in English. It means “arrange yourselves under,” which may or may not imply what the Romans think it did. It is a military word for deployment in arranged, battle-ready formation, so the Romans jumped all over the possibility of hierarchy. Romans love hierarchy. But in context, in several places it is used in passages where Paul is talking either about the plight of Christian women with unChristian husbands and how to face the world together and speak your faith to a Greek or Roman husband who believes you’re property (this is the topic in the letters to Corinth), or following passages about putting on the armor of God and resisting the devil (in the letter to Ephesus). Remember that at the time, these letters were being written to challenge hierarchy, not support it, and to propose a radical egalitarianism in human relationships, and that most Christians in first-century Europe were women. The teaching that we are all one body in Christ was a harder pill to swallow for men in the Roman Empire than it was for women. The letters to Corinth speak of non-Christian husbands as vulnerable, still in bondage to old ways of thinking, half asleep and like soldiers blundering into enemy fire. In context, hupotossomai probably means to deploy yourself in support of your spouse against the enemy.

“Hupakoe,” which we keep translating obey, and which is used for children, never for spouses, in the New Testament, doesn’t mean “obey,” either. It means “hear under.” Children are being advised to listen and learn, not blindly obey. Again, context. These are letters urging people not to return to the ways of their parents, to abandon oppressive systems and live in a radically new way that is different from how their parents live. What’s being urged will create a world of strife within multigenerational Greek families. Hence the urging in that letter for parents not to provoke their children to anger and for children to listen deeply in the midst of the strife.

The text is beautiful and often more nuanced than it appears in translation, and we consistently mangle it because we treat it like a Latin/Roman text instead of a collection of Hebrew and Greek texts. (When you translate radical or subversive texts into the language of Empire, you eventually get Imperial texts).

And this leads me to reflect on the power of writing. As a writer, I’m a bit biased in thinking about how powerful written language is. But, when we look at a holy book that has been translated and mistranslated and construed and misconstrued over the course of 2000-2,500 years (or, if you want to look at something more recent, of less than 250 years of age, and within our own language without the added complexities of translation, consider the U.S. Constitution), it’s hard not to conclude that sometimes the treatment of a single word can shape entire cultures and political systems. That’s a humbling thought.

ADDENDUM: This post, which began as informal amusement about camels and ropes, has turned out to wildly popular, which I didn’t expect. So I have edited it to provide a little more context on a couple of the words (mostly hupotassomai and hupakoe), in hope that the post will be more useful.

P.S. On threads sharing this post, several people have brought up the old hypothesis that first-century Jerusalem had a “needle gate” that was very narrow, where a merchant had to unload their camel in order to get through. It’s an elegant and fitting idea, but it’s not historical. It’s a folk etymology proposed by fifteenth century clergy to explain the “camel through the eye of a needle” verse. (In other words, it was made up to explain the verse.) There’s no evidence of narrow gates (either a specific one or generally) being called needle gates or eyes of the needle in the ancient Middle East.

32 thoughts on “A Camel Through the Eye of a Needle, and Other Wild Tales of Translation”