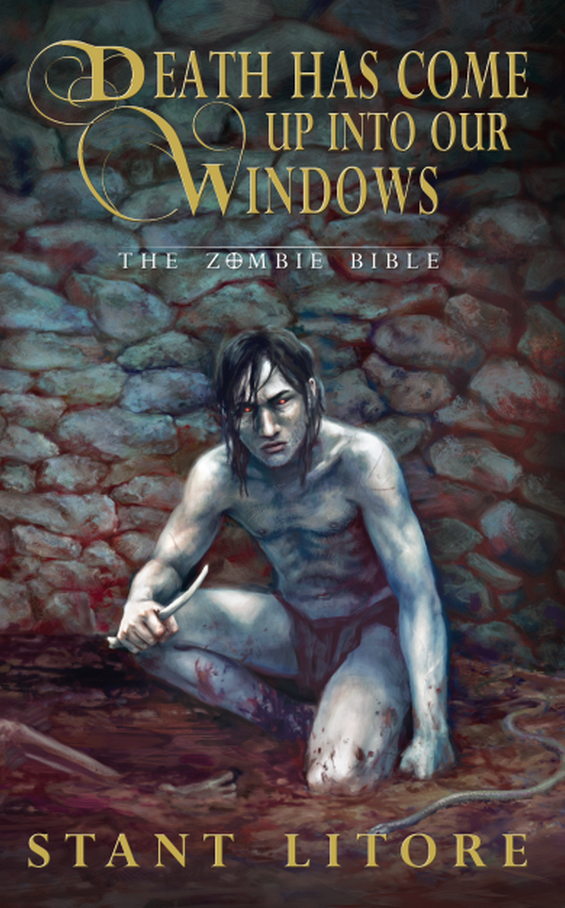 Besides a philosophical zombie thriller, Death Has Come Up into Our Windows is a love story, a married man’s hymn to marriage:

As dawn slipped into his house with the sound of voices in the street on that last day, Yirmiyahu had lain beside his wife in their bed. The navi had watched her sleeping, her soft body, her graceful eyelids, the delicate curve of her jaw. He thought how beautifully she was made, how God, who had birthed her into the world, must have meant for the whole world to look like that, like her. At peace, glowing with beauty. Yirmiyahu smelled her hair and caressed the long strands of it.

The first time he’d seen her, she was dancing in the barley during the Feast of Tents, with all about her the pavilions and booths of the People, and above her a night filled with stars. He had danced with her, and asked her name and her mother’s, and she had laughed when he told her he was a levite by birth, like her, for she did not believe him. After they danced they had kissed, and the touch of her lips on his left him dizzy, and when he stumbled back to his father’s tent he’d realized how sharp, how bright in color were the tents and the people and the wild thyme growing by the path.

The wedding bowl had cracked beneath their feet. He remembered how she had hummed as she moved about their first home in Anathoth, and the way she cried softly a few months later as she packed his levite’s robes and her green linen gown—a gift of her mother’s—for the long walk into the hills to Yerusalem. The words they’d spoken together when he came into the room to hold her. The soft warmth of her beside him as they finished the packing together.

They had gone in the summer, and on the first night of their journey, as they laid out their bedding beneath a stand of terebinths, the cicadas in the branches made a roar with their wings, a droning that drowned out all the world’s other sounds, wrapping husband and wife in a hum of privacy, the two of them alone together in the summer night. He remembered the gentleness of her kisses on his throat, the soft noises they had made together, the way she lay in his arms afterward and dreamed with him of children.

But Death Has Come Up into Our Windows is also the tale of a city devoured by the ravenous dead, a city in which the living and the dead hunger and love can scarcely survive:

A few unclean dead, or many (their number grew so fast), were hunting in the alleys. He thought of the shambling corpses, their hands scratching at doors, pulling at the fragile wood. A few months ago, he had seen two—one had been a priest, a priest, one of his own caste, still clad in the simple white robes of the levites who kept the Temple—he’d seen those two tear down a door and drag a woman out into the street. He had run at them, crushed one’s head with a shovel he’d taken from a worker at the wall. But the other—the priest—had sunk its teeth deep into the woman’s shoulder. He remembered her cry of pain, the wildness of her eyes, her terror. He remembered the way the walking corpse that fed on her looked up at him when he came at it, its eyes with nothing in them but hunger and animal hostility. He remembered its wavering moan.

“People do not feel safe in their own city. Miriam, my Miriam, there are children starving, alone. Easy prey for the dead. And there are more dead in the city than we think.”

In December 2011, Death Has Come Up into Our Windows spent 3 weeks in the top 7 bestselling horror novels in Amazon’s Kindle Store. Today, you can read this story of love and loss and zombies on your kindle, or in paperback … or listen to the audiobook. I hope you will find the read both surprising and moving.