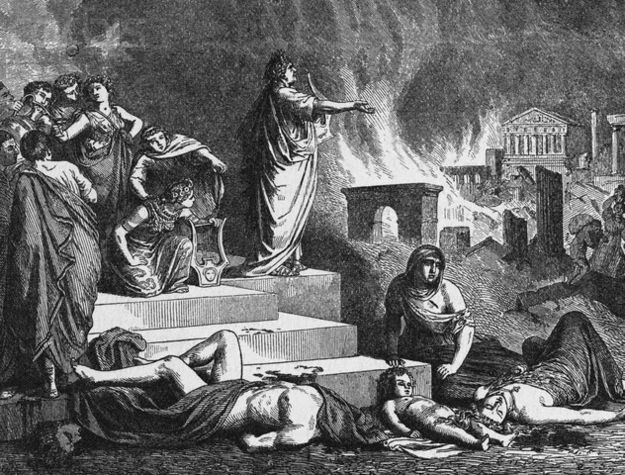 The Roman emperor Nero Claudius Caesar Augustus Germanicus, desiring the worship, adoration, and awe of millions, had to have the biggest, gaudiest, flashiest everything. He had big plans. One time, Nero proposed to the Senate and People of Rome that they make Rome even greater than it had ever been by tearing down a third of the city and building a series of magnificent palaces on top of the newly cleared land. The conjoined palaces would be called Nero City (Neropolis).

The Roman congress was adamantly against the proposal of building Nero City, no matter how Nero Claudius Caesar raged and tantrummed and insisted that he’d simply shut down the whole Roman government if they didn’t build what he wanted. Curiously, shortly after the Senate rejected their executive leader’s plans for Nero City, a devastating fire burned down the senators’ ancestral family homes on the Palatine Hill and much of the rest of the city, too. It was rumored that the fire was started by arsons employed by Nero.

In the place of those lost homes, Nero built a Golden House (Domus Aurea), the biggest and most golden house in all the world. It covered the Palatine Hill and the slopes of several other adjacent hills in Rome. The palace covered more than 100 acres and may have covered more than 300 acres; we don’t know the size for sure, because we haven’t dug up the entire grounds. We know that the Golden House had 300 rooms covered in polished white marble, as well as vast halls coded by theme and color. There was a massive revolving dining room where guests at dinner could be showered with flower petals and perfumes while the room slowly, slowly turned. There were parks and woods inside the palace, and a vast artificial lake where Nero had fleets of gladiators perform re-enactments of Rome’s naval combats, showing in the storm of swords and the crash of timber and the cries of battle just how much Rome was the greatest and had always been the greatest. Nero also had a 100-foot statue of himself carved and parked inside the lobby of the Golden House. The statue of Nero may have been even bigger; it depends on which ancient source you’re reading. Nero paid for a 120-foot statue, but he may have only gotten a 99-foot statue in the end. And judging by the differing reports from his contemporaries, there may have been some public contention over what the actual size of his finished statue was. It was, regardless, the hugest statue in Rome, the city in the Empire that had all the statues, all the best statues.

Nero also had to be the best and greatest at everything. He wanted to be the best athlete and the best boxer, and he competed in the Olympic Games. He wanted to be the best musician and actor and entertainer, and he composed songs and would sometimes hold a concert for an entire night that no one attending was permitted to leave, though there were reports of guests going into labor during Nero’s concert, or feigning death in order to get out. The safer option, of course, was to wait until the end and give Nero Claudius Caesar your fullest applause. He believed that he was the best architect, the best shipbuilder, the best engineer, that he knew more about each of those subjects than those Romans who had spent their lives in those professions. On one occasion, in an elaborate (but so very Nero) plot to assassinate his mother, Nero designed an ornate pleasure boat that would collapse and sink, and then sailed his mom off in it. It did collapse and sink, but too quickly, so she swam ashore. Another time, he built her a collapsible house.

Nero was incredibly popular with the masses. He would put on vast gladiatorial games for them, he built baths and gymnasiums that anyone could use, he bragged incessantly about the greatness and glory of the Roman military and the Roman people, and he always found someone to blame for all of the problems that hardworking Romans had to face. Their gods were being besmirched and their jobs were being taken by immigrants from the Middle East. And when the great fire of AD 64 burned much of the city, it was clearly the immigrants’ fault. They had come here, sneaky-like, with their alien religion and their violent Middle Eastern ways, and they hated Rome and Romans, and they had started the fire. They were terrifying arsonists and violent people and they needed to be dealt with. Thrown to the lions, burned alive, executed in very showy ways so that the Roman people could see the retribution for their lost jobs and lost homes and lost family, and so that Rome could be rebuilt and be made great again.

Epictetus, a Roman philosopher of the day, criticized Nero Claudius Caesar for his need for adoration. Epictetus said that Nero was a childish, unhappy man who did everything he did in order to get as much praise as possible. If anyone else was getting praise from the Roman masses, Nero would fly into a rage and smear and attack that other person. Or even have them done away with. Suetonius, a historian, said that Nero was possessed by an “unreasonable craving for immortal fame.”

Nero talked a lot about the Roman economy. He talked about closing loopholes in the Roman tax laws and making taxation fair. He talked about spending only on things that mattered and made Rome great … like Nero City. And, curiously, he bankrupted the empire’s treasury and sent Rome into a deep abyss of debt to foreign banks. And though Nero talked all the time about the greatness of Rome’s military, he wasn’t actually very interested in military plans or details. He announced that he intended to abandon the empire’s campaigns across the sea in Britain, he consistently ignored the advice of Rome’s military commanders, and in the end, his military leaders rebelled. Reportedly, Nero’s last words were “Qualis artifex pereo! (What an artist the world is losing!)”

All this, naturally, has nothing to do with current events or persons in today’s world.