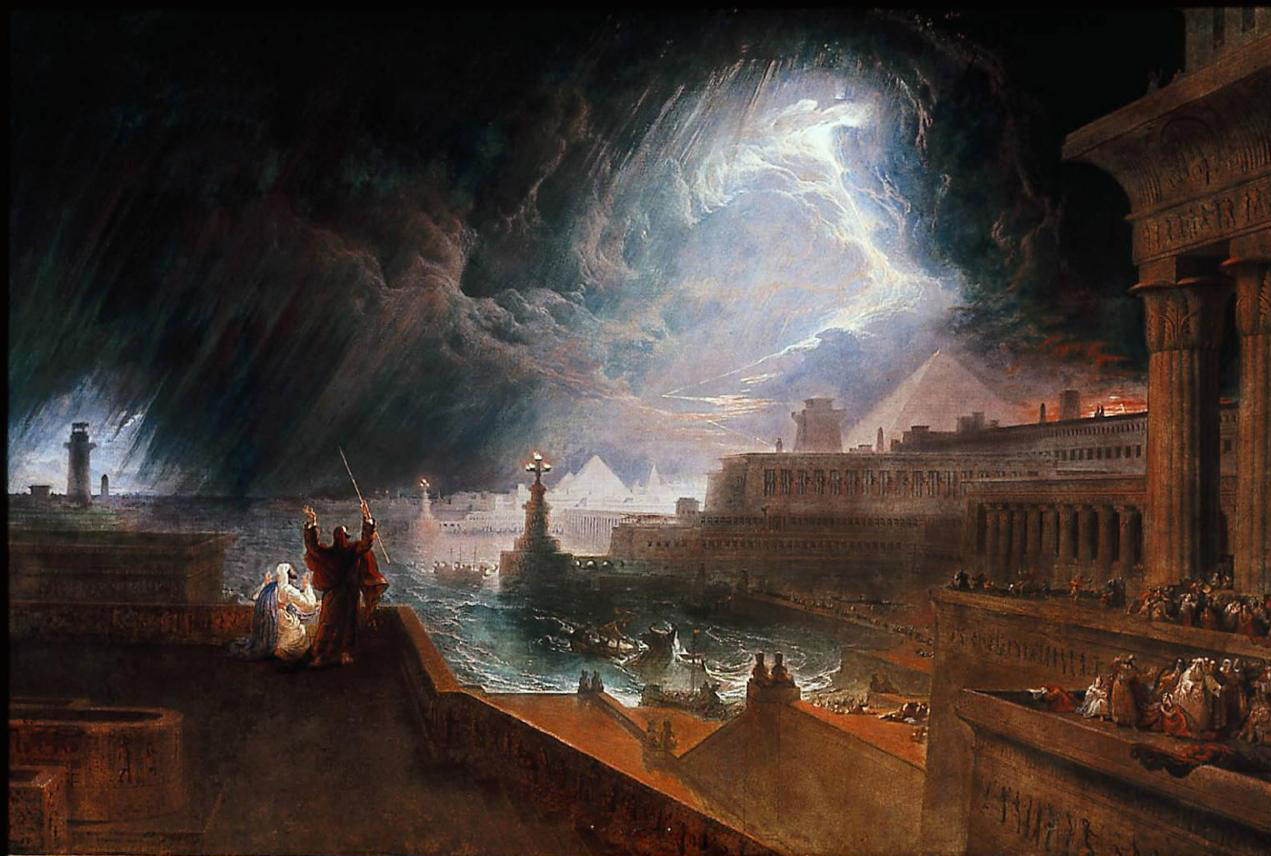 In Death Has Come Up into Our Windows, I offer this reinterpretation of the ninth plague of Egypt, the plague of hoshekh (darkness):

“He called the darkness by its name: hoshekh. Naming it, knowing it, might at least keep it from choking him: hoshekh. The darkness that is the darkest of all darknesses, the darkness that hides at the back of caves. The darkness that fills the mind of one who refuses to hear the cries in the street, the darkness that hides behind the ribs of a man or a woman, that eats at everything that is real and true inside them. Hoshekh. Once, the Lawgiver had called a plague of hoshekh upon the people of the cities of the Nile, who had not heard the cries of their slave workers or their wives, the cries when soldiers took their infants and drowned them in the river. And when those unhearing people yawned and lay themselves down for sleep, the hoshekh poured from their mouths like dark milk until their houses and their land was filled with it. When they woke in the morning, they were blind and could not even move from their beds, for the hoshekh was heavy on them as they lay, and heavy inside them, as though they were at the bottom of a pool of dark mud. For three days and three nights they lay moaning in the hoshekh, while the people of Israel ate and sang in the hovels of the slave encampments, where there was light and, for once, no work.

Hoshekh, Yirmiyahu called this darkness in the well that pressed on his skin. The whole city above must be filled with it, this night. Darker than dark, the city. Only the dead could move through it with their slow feet, their leaning bodies scraping against the walls of houses and shops, their fingers reaching over the stone, hungering.”

– Death Has Come Up into Our Windows

Death Has Come Up into Our Windows is about the things we refuse to see; the novel retells the story of the “weeping prophet,” Jeremiah. whose city — in this version of the sixth century BC — is overtaken by poverty, violence, hunger … and the hungry dead. In a visceral, nightmarish setting, the young prophet tries to call the city’s attention to its own dying and disinherited members.

A city that would much rather close its windows and shiver quietly, pretending nothing is wrong.

But you can’t keep death and hunger out by closing your windows, or your doors, or your eyes, by clapping your hands over your ears to muffle the screams of those suffering in the streets outside.

What you wish to ignore or deny will peel open your window and climb in.

Eventually, it always climbs in.

Stant Litore is the author of The Zombie Bible, The Ansible Stories, The Running of the Tyrannosaurs, and Dante’s Heart — and is endlessly fascinated by religious studies. You can support his work — and get some amazing stories to read — by joining his membership on Patreon: www.patreon.com/stantlitore